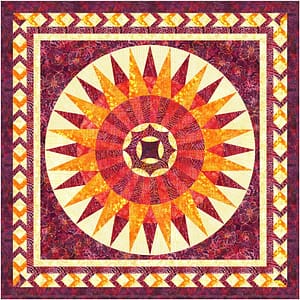 Lately, my designs have a distinctive circular trend – compasses, wheels, suns, Dresdens, New York beauties, fans, and similar motifs. Sun King is one of those creations. So what is the difference in these patterns?  Very good question.

The simplest of the curved designs is Drunkard’s Path. Generally, Drunkard’s Paths are pieced curves – convex (circle) and concave (background). The others included in this discussion can be curved pieces or appliqued onto a plain background. Both methods are acceptable. Regardless, the curved design is an arc or quarter circle rather than a full circle. Four can be combined to make a full circle.

New York Beauty blocks are the most complicated of the arc blocks. They are most like the Fan because they have multiple arcs. The inner arc(s) is plain. At least one other arc is foundation pieced with triangles or sawtooth design. These points provide an art deco feel. Like the Sun and Fan, the New York Beauty can be varied by adding arcs, modifying the number of stripes, wedges or triangles, or changing the dimensions of the arcs. A block can look quite different with wide versus thin arcs.

Wheels are most like fans, since wedges are sewn together. The major difference is a fan is an arc, while a wheel is a circle or ring. Wheels are generally appliqued onto a plain background. If appliqued, some quilters will cut away the fabric under the wheel to reduce bulk. Others, like me, will fuse or spray baste the wheel to the background to minimize shifting and wrinkles. The center circle may be pieced or appliqued on top of the Wheel. Alternatively, the center circle may be left open for a wreath effect.

Dresdens are a special type of Wheel. Wheels have smooth curves on the wedges, like you would expect on a wagon wheel. Dresdens more decorative outer edges, and sometimes inner edges, of the wedges. If the edges are scalloped, the wedges are called petals. If the edges are pointed, the wedges are called blades. Dresden petals or blades can be solid or pieced.  Like Wheels, Dresdens are typically appliqued onto plain backgrounds. The centers may be appliqued or left open as wreaths. Wheels and Dresdens make beautiful Christmas tree skirts and round table coverings.

Sun Compasses are to New York Beauties as Wheels are to Fans. The Sun Compass is a circle rather than an arc. There are at least two rings with a Sun Compass and one of those rings contains a pointed or sawtooth pattern, which makes it look like our traditional image of a sun. Occasionally, quilters will used waves instead of points in a ring, adding to its complexity and beauty. Sun Compasses are usually foundation pieced and appliqued to a solid background.

Finally, Mariner’s Compass is the most detailed of the curved patterns. It is a special type of Sun Compass, which emphasizes the cardinal coordinates of North, South, East, and West. Therefore, the points are generally found in multiples of four.

Whether you chose curved piecing or applique is up to you. Applique can be by hand, by machine, or by fusible techniques.  The important part is that the quilter is comfortable with the method they chose. There are no quilt police to enforce any hard and fast rules with curved piecing.

There are some tips that can make piecing curved patterns easier. First, use glue, pins or basting to ensure the pieces end up where you planned. Second, go slow and test the method first. If you have the time, patience and materials, test a few methods to see which works best. I used these when I made the test version of Sun King. I tried to both piece and fuse the center ring. The ring on the let was pieced, while the one on the right was fused. I liked the finished look of the fusing better, so I used it in my quilt. But I included both options in the design as some may be better at piecing curves than I am!

Here is the sample of Sun King I made using Hoffman Watercolors. I can’t wait until the Hoffman Flame collection is released so that I can make it with those fabrics! (page 102 of their catalog). While you are waiting with me for the fabric release, you can order the Sun King pattern now for retail or wholesale from our shop.