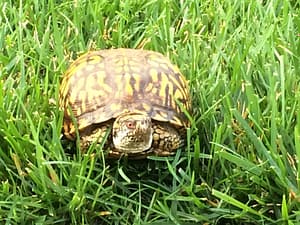 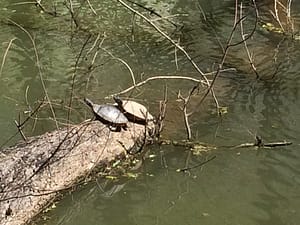 Warning: I brake for turtles! Honestly, I do. I stop to save box turtles and other critters from the road. The thought of one of those little creatures getting hit by a car leaves a pit in my stomach, Yes, I am a softy, but I draw the line at snapping turtles. They are not friendly critters and the only safe way move them is with a shovel, which I don’t routinely tote in my car.

Yep, I do love turtle, I don’t know why. I wouldn’t have one as a pet, but I admire them in the wild. Along the C&O Canal trail, there is an area where the turtles and terrapins sun themselves in the warmer weather. It is one of my favorite places to walk. I like to stop there and watch them.

Even on vacation, I seek turtles out. I was fortunate enough to swim with sea turtles in Hawaii. It was one of the most amazing experiences. They are so graceful. They glide past you as if you are one of them.

You may be wondering why I am gushing about turtles and what this may have to do with quilting. Let me get to the point. Timeless Treasure’s new Tonga Oasis collection reminds me of my trip to Hawaii. The colors in the fabrics mimic those of the ocean near Maui. With that trip in mind, I chose a traditional turtle block for my latest pattern made with Tonga Oasis. The combination of colors and turtle block resulted in Ridley, a 40-inch square quilt. The quilt center can be multiplied by four to make a 72″ square quilt, or by nine to make a 104″ square quilt. The blocks are easy to assemble, so it is a quick for a weekend project.

Why is the quilt pattern named Ridley? Ridley turtles are the smallest of the sea turtles and most of them are endangered or threatened. Kemp’s Ridley turtle weighs about 100 lbs, lives in the Gulf of Mexico and along the Altantic Coast of the United States. It was once a thriving species, but by the 1980’s only 500 nesting pairs were left. Likewise, Olive Ridley’s are only about 100 lbs, but are found throughout the Pacific, Atlantic, and Indian Oceans. Both are threatened for several reasons, which include being caught in fishing nets, harvested for eggs and turtle meat, loss of habitat, hit by boats, pollution, and climate change.

We hope you enjoy our new quilt pattern, Ridley. It is available for wholesale and retail in our shop.